Michele Bianconi studied Classics (BA) and Classical Philology and Ancient History (MA) in Pisa, and General Linguistics and Comparative Philology (DPhil) at Oxford. Before taking up his current post, he was postdoctoral researcher at the Università per Stranieri di Siena (2020-1), Stipendiary Lecturer in Classics at St Hilda’s College (2020) and tutor at the Faculties of Classics, Linguistics, and Oriental Studies at Oxford (2016-9). He is currently a Fellow in Hellenic Studies at Harvard’s Centre for Hellenic Studies and non-stipendiary Lecturer in Classics at St Hilda’s College, Oxford.

Michele’s field of research, which is part of ‘Indo-European Studies’, lies at the intersection between Classics, Linguistics, and Near-Eastern studies. His DPhil dissertation was on the linguistic relationships between Ancient Greek and the Anatolian languages between the second and first millennia BCE. He has written papers and given talks on Greek, Anatolian and Latin linguistics, on Indo-European reconstruction, and on specific topics in other ancient Indo-European languages.

Michele has taught Indo-European comparative linguistics, General Linguistics, and Greek and Latin linguistics and literature tutorials, language classes, and reading classes for the undergraduate courses in Classics. He has also taught Hittite and other “minor” Anatolian languages (Lycian, Carian) at the postgraduate level.

Bianconi, M. 2021, There and Back Again: a Hundred Years of Graeco-Anatolian Comparative Linguistics, in M. Bianconi (ed.), Linguistic and Cultural Interactions between Greece and Anatolia: in Search of the Golden Fleece, Leiden/Boston: Brill: 8-39 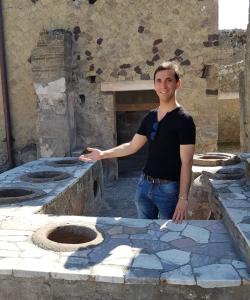