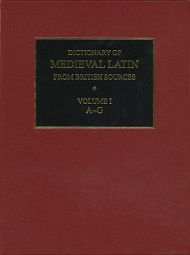 Based entirely on original research, the Dictionary of Medieval Latin from British Sources is the most comprehensive dictionary of Medieval Latin to have been produced and the first ever to focus on British Medieval Latin. It is a definitive survey of the vocabulary of one of the most important languages in British and European history. This new edition, bound for the first time as a convenient three-volume set, incorporates a small number of amendments and additions into the text originally published as a series of fascicules between 1975 and 2013.

Situated at the crossroads of comparative philology, classics and general historical linguistics, this study is the first ever attempt to outline in full the developments which led from the remotest recoverable stages of the Indo-European proto-language to the complex verbal system encountered in Homer and other early Greek texts. By combining the methods of comparative and internal reconstruction with a careful examination of large collections of primary data and insights gained from the study of language change and linguistic typology, Andreas Willi uncovers the deeper reasons behind many surface irregularities and offers a new understanding of how categories such as aspect, tense and voice interact. Drawing upon evidence from all major branches of Indo-European, and providing exhaustive critical coverage of scholarly debate on the most controversial issues, this book will be an essential reference tool for anyone seeking orientation in this burgeoning but increasingly fragmented area of linguistic research. 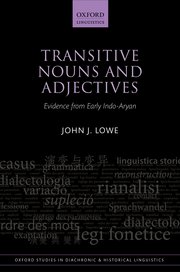 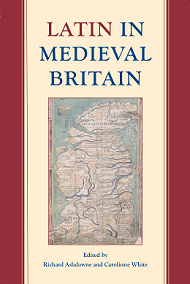 Latin continued to be used across Europe long after the end of the Roman Empire. This collection considers key issues arising from the use of Latin in Britain from the 6th to the 16th centuries. Latin in this period was not the native language of its users but was nevertheless used extensively for a wide variety of functions from religion, literature, and philosophy to record-keeping and correspondence. It existed alongside a number of everyday native spoken languages, including English, French, and Welsh. The chapters in this collection consider Latin with regard to the various contexts in which it was used, looking beyond narrow comparisons with its Roman ancestor to see what medieval users did with Latin and the changing effects this had on the language.

This study discusses the question of whether there is a linguistic difference between classical Attic prose texts intended for public oral delivery and those intended for written circulation and private performance. Identifying such a difference which exclusively reflects these disparities in modes of reception has proven to be a difficult challenge for both literary scholars and cultural historians of the ancient world, with answers not always satisfactory from a methodological and an analytical point of view.  In establishing a rigorous methodology for the reconstruction of the native perception of clarity in the original contexts of textual reception this study offers a novel approach to assessing orality in classical Greek prose through examination of linguistic and grammatical features of style. It builds upon the theoretical insights and current experimental findings of modern psycholinguistics, providing scholars with a new key to the minds of ancient writers and audiences. 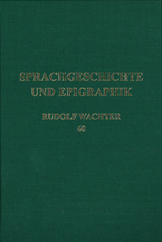 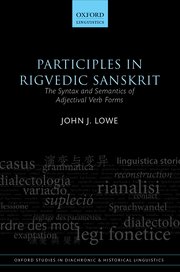 This book examines several thousand examples of tense-aspect stem participles in the Rigveda, and the passages in which they appear, in terms of both their syntax and semantics, applying formal linguistic analysis to the data to produce a comprehensive formal model of how participles are used. The author uses his findings to recategorize the data, by defining certain stems and stem-types as outside the synchronic category of participle on the basis of their syntactic and semantic properties. He suggests alternative sources for these forms and considers the linguistic processes that transformed old participles into non-participial entities. In his conclusion he reassesses the category of participles within the verbal and nominal systems, looks at their prehistory in Proto-Indo-European, and describes their universal, typological characteristics. Several of the conclusions drawn either directly challenge or radically revise received opinion and recent work. 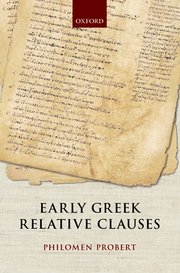 Early Greek Relative Clauses contributes to an old debate currently enjoying a revival: should we expect languages spoken a few thousand years ago, such as Proto-Indo-European, to be less well-equipped than modern languages when it comes to subordinate clauses? Early Greek relative clauses provide a test case for this problem. Early Greek uses several kinds of relative clause, but all these are usually thought to come from one, or at most two, prehistoric types. In a new look at the evidence, this book finds that a rich variety of relative clause types has been in place for a considerable time.

This book investigates how semivowels were realized in Indo-European and in early Greek. More specifically, it examines the extent to which Indo-European *i and *y were independent phonemes, in what respects their alternation was predictable, and how this situation changed as Indo-European developed into Greek.
The comprehensive and chronologically sensitive nature of this study, together with its careful assessment of what is inherited and what is innovative, enables substantive conclusions to be drawn regarding the behaviour of semivowels at various stages in the history of Greek and in Indo-European itself.

This book examines the operation of laws, rules, and principles in Indo-European, the language family which includes the Celtic, Germanic, Italic/Romance, and Baltic/Slavic subfamilies as well as the predominant languages of Greece, Iran, parts of Southern Asia, and ancient Anatolia. Laws and Rules in Indo-European brings together leading scholars from all over the world. It makes a valuable contribution to the understanding of the history of ancient languages and the reconstruction of their ancestors, as well as to research methods.